Print
Based on the tone of the new book “Davos Man,” by New York Times global economics correspondent Peter S. Goodman, one might think he’s opposed to Stakeholder Capitalism. In fact, in this recent interview, his views largely mirror those who believe in a system that optimizes returns for investors by transparently creating value for customers, employees, supply chain partners, communities, and the environment. What he vigorously opposes is using the cover of the “Davos” World Economic Conference or the Business Roundtable pledge to address the needs of all stakeholders while acting to maintain policies that continue to undermine free markets and inequality throughout the world. 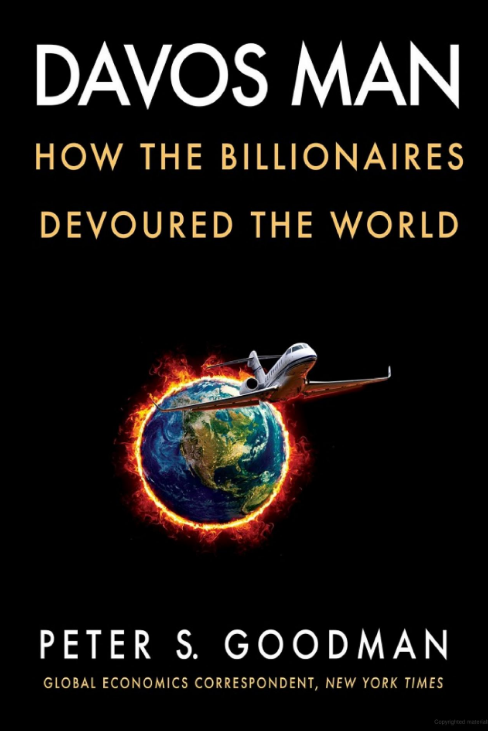 “Davos Man—How the Billionaires Devoured the World”, recently published by Harper Collins, reads to some like a scathing rebuke of Stakeholder Capitalism. In a recent ESM interview with its author Peter S. Goodman, Global Economic Correspondent for the New York Times, Goodman insists he is a firm supporter of promoting free markets and innovation, letting companies fail, enabling worker voice and protecting their rights, enforcing anti-trust laws. and enacting a progressive tax system that provides government the resources necessary to fund a safety net that protects citizens from disruptive change.
When he first conceived of the book before the pandemic, he explains, his focus was on economic inequality and the rise of right-wing populism. After the arrival of the pandemic, when he saw major companies using the World Economic Forum and Business Roundtable pledges to cover up for what he feels to be the very practices that cause such inequality, "I expanded the focus to address the pandemic and the performance of billionaires pledging fealty to Stakeholder Capitalism."
What he fervently disagrees with are capitalists making noble-sounding pledges such as the Business Roundtable’s charter for corporations to address the needs of all stakeholders or the World Economic Forum’s Stakeholder Capitalism principles to position themselves as saviors of the world to cover up practices and policies that promote lower taxes for corporations, minimize regulation, enable dangerous concentrations of market power, and actions that undermine the trust needed for labor to support innovation.

Are Signatories Really Practicing What They Preach?

For instance, he notes, Amazon founder Jeff Bezos, a signatory of the Business Roundtable pledge, despite of or because of the pandemic, supported highly demanding often unsafe working conditions, including inadequate access to masks, even allowing the termination of an employee who attempted to organize workers to address these concerns. To add insult to injury, shortly after the first space shot of his Blue Origin venture, he thanked his employees for funding the venture.
Goodman notes that Larry Fink, whose BlackRock organization recently has announced the creation of a new Center for Stakeholder Capital, put the squeeze on the Argentine government to repay loans during a financial crisis, potentially causing tremendous hardships to the citizens in an underdeveloped nation. Another example is Pfizer, he notes. The company, he claims, benefited from enormous government subsidies to create the vaccine and then proceeded to sell the vaccine to the highest bidders around the world, setting up the potential for fostering new variants in poor countries with high numbers of unvaccinated citizens.
To underline his point, he says that Salesforce CEO Marc Benioff, one leading proponent of Stakeholder Capitalism, told him that the thesis of his book was perhaps 70% correct.

Goodman believes that the recent Edelman Trust Barometer that finds much higher confidence in business than in government, media, or in NGOs (non-governmental organizations) throughout the world proves the effectiveness of what he believes is a public relations effort to maintain a status quo that undermines the effectiveness of capitalism and ensures the continued flow of money up to very richest people. “It’s great that companies stepped up to make purchases of masks to help address shortages in the US, but that doesn’t mean we can leave it to them to address all of society’s ills.”
In the US especially, he notes, “Corporations have pushed for the lowest possible taxes, the least amount of regulation, and almost no anti-trust enforcement, so that government is essentially starved of the resources necessary to create a safety net to protect employees from disruption. So, when there is a crisis like the pandemic, it’s easy for business leaders to come in with gestures that make them look like heroes.” In the meantime, he notes, lack of anti-trust regulation has created so much consolidation in the meat industry that “the cattle ranchers on whom Americans depend upon to meet their appetite for beef are on the edge of going out of business because the meat-packing industry is now controlled by only a handful of companies.”
He states, “I’m all in with Stakeholder Capitalism if it means corporations want to commit to principles to address climate change, be kind to employees, and to support labor. In fact, we should applaud that, but you can’t take such pledges to the bank. Those pledges don’t mean we should hand over our democratic rights and our tax revenues to business and the wealthy, eliminate regulations, and give them free rein to restrict market competition because they say, ‘Hey, we’ve got this.’” In the same way that food companies that produce organic products need to have such claims certified by independent third parties and suffer legal consequences if those claims are found to be fraudulent, corporations need to have their claims about Stakeholder Capitalism held to the same requirement to produce auditable disclosures.”
In fact, he says he believes in the Environmental, Social, Governance (ESG) movement “if there is an independent, legitimate standards body to verify these claims. But when I see ESG funds with huge holdings in companies like Amazon, it appears to me that it’s a case of having self-interested people setting those definitions.”  He continues, “I am all in for free markets people when people have transparency and reliable information, but we can’t leave those standards to fund managers.” The challenge, he says, is that markets cannot work if people do not have reliable, verifiable information with which to make decisions.

Good Intentions Are Not Sufficient

Goodman says that Klaus Schwab might very well have had good intentions when he created the World Economic Forum and started promoting the concept of Stakeholder Capitalism. He agrees with Larry Fink that fossil fuel companies have to be part of the solution. “The question is: who is setting the rules and who is holding organizations accountable for their pledges.” No one would accept product labeling ensuring that food products are organic without the verification of a credible third party, he underlines.
Asked about Securities & Exchange Commission Chairman Gary Gensler’s reported commitment to creating metrics-based reporting requirements for human capital practices by public companies, “I am willing to give Gary Gensler a chance. He was originally a proponent of the deregulation of the derivatives market that helped result in the 2008 crash and the Great Recession. There was this notion that the banks would not be so foolish as to take steps that would undermine their own self-interests. We saw where that led.” He believes that Gensler may have been chastised by this experience, which could lead to more meaningful, metrics-based human capital disclosures than the current disclosures based on materiality that have produced little but the equivalent of press releases.
Goodman says he agrees there’s an important role for business to address economic inequality and climate change. A free market solution, he asserts, “would involve what we had in the US between 1945 and 1975—a progressive tax system that has businesses and wealthy individuals paying their fair share in taxes, serious anti-trust enforcement, a better safety net, greater access to health care, and strong labor unions or other institutions to protect the rights of workers.”
Most Americans believe in fostering entrepreneurialism, “but look at all the people who would gladly leave their jobs to pursue a new business but can’t for fear of losing their health insurance.”

Labor Unions Can Play a Positive Role When There Is Trust

To the people who say US labor unions are part of the problem, he cites the example of a mine he visited in Sweden with a strong labor union where the workers completely supported automation and other measures that reduce the need for labor. “That’s because they live in a system in which the company shares the gains in productivity with the workers and invests in skills training so that they are assured of keeping their jobs. In the US, there is no trust. Unions end up opposing innovation with the support of their members because they all know that not only will they not benefit from the productivity savings, many workers will probably lose their jobs as a result. It would require a huge leap of faith for anyone in the US to believe that most companies will share any of the proceeds with the employees or protect their jobs.”
He concludes, “It’s easy to see why most Americans are highly skeptical of government. Big companies and the wealthy or sitting on hordes of cash while the government is starved of resources. During the pandemic, they see the CDC (Center for Disease Control) and FDA (Food and Drug Administration) provide what they feel is conflicting guidance in the face of unprecedented circumstances, while they witness major companies working under almost total monopolies generating large returns and listening to powerful media companies backed by financial interests confusing them with false information. Of course, under those circumstances, many would believe that business can do a better job than government to protect their interests.”


[return to top]
Master the “S” of Environmental, Social, Governance (ESG), A.k.a. Stakeholder Capitalism
The Enterprise Engagement Alliance at TheEEA.org is the world’s first and only organization that focuses on outreach, certification and training, and advisory services to help organizations achieve their goals by fostering the proactive involvement of all stakeholders. This includes customers, employees, distribution and supply chain partners, and communities, or anyone connected to an organization’s success.
Training and Thought Leadership

Engagement Digital Media and Marketplaces
Video Learning
The EEA Human Capital Management and ROI of Engagement YouTube channel features a growing library of 30- to 60-minute panel discussions with leading experts in all areas of engagement and total rewards.