Print
The issue of investing in people is heating up. In a recent ESM article, “Sen. Elizabeth Warren Proposes Bill That Would Mandate Enterprise Engagement Practices at Large Companies,” we predicted that pressure would continue to grow for legislative action on investments in Human Capital. Now Senators Chuck Schumer of New York and Bernie Sanders of Vermont are proposing a bill that would put limits on stock buybacks on public companies that fail to invest in people.

In a recent New York Times guest editorial, Senators Charles Schumer and Bernie Sanders announced their intention to introduce legislation to “prohibit a corporation from buying back its own stock unless it invests in workers and communities first, including paying all workers at least $15 an hour, providing seven days of paid sick leave and offering decent pensions and more reliable health benefits.” Their objective is to “set minimum requirements for corporate investment in workers and the long-term strength of the company as a precondition for a corporation entering into a share buyback plan. The goal is to curtail the over-reliance on buybacks while also incentivizing the productive investment of corporate capital.”
Like Senator Elizabeth Warren, Schumer and Sanders argue that “from the mid-20th century until the 1970s, American corporations shared a belief that they had a duty not only to their shareholders but to their workers, their communities and the country that created the economic conditions and legal protections for them to thrive. It created an extremely prosperous America for working people and the broad middle of the country. But over the past several decades, corporate boardrooms have become obsessed with maximizing only shareholder earnings to the detriment of workers and the long-term strength of their companies, helping to create the worst level of income inequality in decades.”
[return to top]

The threat of such legislation not only puts pressure on CEOs to address effective Human Capital management from a public relations standpoint, but also helps educate them on practical processes they can implement without government involvement. There is extensive evidence that companies that invest in an enterprise approach to engagement significantly outperform their competitors in the stock market. See the Engaged Company Stock Index at TheEEA.org, which has significantly outperformed the S&P 500 in the over six years since it was created. ESM has in past articles suggested that with just a small portion of what they spend in stock buybacks, public companies can get a better, more sustainable return-on-investment through strategic and systematic stakeholder engagement strategies.
The senators specifically take aim at “the explosion of stock buybacks. So focused on shareholder value, companies, rather than investing in ways to make their businesses more resilient or their workers more productive, have been dedicating ever larger shares of their profits to dividends and corporate share repurchases. When a company purchases its own stock back, it reduces the number of publicly-traded shares, boosting the value of the stock to the benefit of shareholders and corporate leadership.”
They estimate that between 2008 and 2017, 466 of the S&P 500 companies spent about $4 trillion on stock buybacks, equal to 53% of profits. An additional 40% of corporate profits went to dividends. “When more than 90% of corporate profits go to buybacks and dividends, there is reason to be concerned,” they say. From the perspective of Enterprise Engagement practices, imagine what organizations could accomplish simply by better utilizing dollars already spent to engage key stakeholders in ad hoc, reactive tactics that have changed little in decades.
[return to top]

Sanders and Schumer argue that “stock buybacks fail to benefit the vast majority of Americans. That’s because large stockholders tend to be wealthier. Nearly 85% of all stocks owned by Americans belong to the wealthiest 10% of households. Of course, many corporate executives are compensated through stock-based pay. So when a company buys back its stock, boosting its value, the benefits go overwhelmingly to shareholders and executives, not workers. Second, when corporations direct resources to buy back shares on this scale, they restrain their capacity to reinvest profits more meaningfully in the company in terms of R&D, equipment, higher wages, paid medical leave, retirement benefits and worker retraining.”
The senators singled out Walmart, which “recently announced plans to spend $20 billion on a share repurchase program while laying off thousands of workers and closing dozens of Sam’s Club stores. Using a fraction of that amount, the company could have raised hourly wages of every single Walmart employee to $15, according to an analysis by the Roosevelt Institute.” They pointed to Harley Davidson, which “authorized a 15 million share stock-repurchase around the same time it announced it would close a plant in Kansas City, and Wells Fargo has spent billions on corporate stock buybacks while openly plotting to lay off thousands of workers in the coming years.”
No matter what one’s politics, these optics aren’t good from a consumer or employee point of view. “Some may argue,” they say, “that if Congress limits stock buybacks, corporations could shift to issuing larger dividends. This is a valid concern—and we should also seriously consider policies to limit the payout of dividends, perhaps through the tax code.”
[return to top]

Senators: Investment in People Is Better for the Economy

“Why wouldn’t it be better for our national economy if, instead of buying back stock, corporations paid all of their workers better wages and provided good benefits?” they ask. “Why should a company whose pension program is underfunded be able to buy back stock before shoring up the pension fund? Whichever way a corporation chooses to invest in its workers, what’s clear to the vast majority of Americans is that companies should devote resources to workers and communities before buying back stock.”
Democratic leaders with credible voices and large followings are jumping on the bandwagon: they want government to, in effect, legislate strategic investment in people. CEOs could not only reduce the political pressure by voluntarily adopting a strategic and systematic approach to people management on their own, but also reap the benefits in terms of greater, more sustainable performance and a better experience for all stakeholders. Executives in Sales, Marketing, Human Resources, Finance, and their solution-providers can benefit by making their CEOs aware of these developments.
[return to top]
Master the Principles of Enterprise Engagement to Achieve Organizational Goals and Enhance Your Career
Live Education: Enterprise Engagement in Action Conference at Engagement World, April 3, 2019, in San Francisco, in conjunction with the Selling Power Sales 3.0 Conference. Learn about the economics, framework, and implementation process for an ISO certifiable approach to achieving organizational objectives by strategically fostering the proactive involvement of all stakeholders. Learn more and register now. 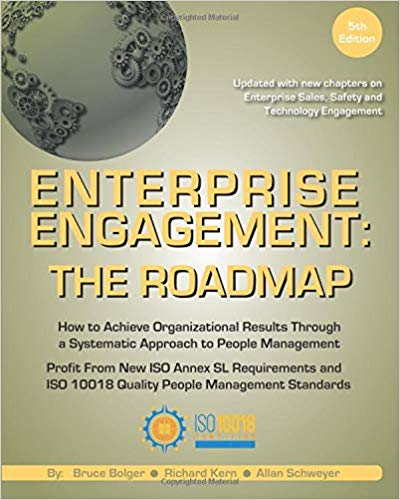 Plus: 10-minute short course: click here for a 10-minute introduction to Enterprise Engagement and ISO standards on Coggno.com.

Services: The International Center for Enterprise Engagement at TheICEE.org, offering: ISO 10018 certification for employers, solution providers, and Enterprise Engagement technology platforms; Human Resources and Human Capital audits for organizations seeking to benchmark their practices and related Advisory services for the hospitality field.
The Engagement Agency at EngagementAgency.net, offering: complete support services for employers, solution providers, and technology firms seeking to profit from formal engagement practices for themselves or their clients, including Brand and Capability audits for solution providers to make sure their products and services are up to date.

C-Suite Advisory Service—Education of boards, investors, and C-suite executives on the economics, framework, and implementation processes of Enterprise Engagement.
Speakers Bureau—Select the right speaker on any aspect of engagement for your next event.
Mergers and Acquisitions. The Engagement Agency’s Mergers and Acquisition group is aware of multiple companies seeking to purchase firms in the engagement field. Contact Michael Mazer in confidence if your company is potentially for sale at 303-320-3777.
Enterprise Engagement Benchmark Tools: The Enterprise Engagement Alliance offers three tools to help organizations profit from Engagement. Click here to access the tools.
• ROI of Engagement Calculator. Use this tool to determine the potential return-on-investment of an engagement strategy.
• EE Benchmark Indicator. Confidentially benchmark your organization’s Enterprise Engagement practices against organizations and best practices.
• Compare Your Company’s Level of Engagement. Quickly compare your organization’s level of engagement to those of others based on the same criteria as the EEA’s Engaged Company Stock Index.
• Gauge Your Personal Level of Engagement. This survey, donated by Horsepower, enables individuals to gauge their own personal levels of engagement.
For more information, contact Bruce Bolger at Bolger@TheEEA.org, 914-591-7600, ext. 230.
[return to top]