As author of Strategic Management, A Stakeholder Approach, first published in 1984, R. Edward Freeman can be considered one of the founders of the theory underlying the Stakeholder Capitalism movement of the 2020s. He’s Professor at the Darden School at the University of Virginia and of the more recently published Stakeholder Theory, an update on the topic since the publication of his first book. ESM recently interviewed Freeman to learn his views on the state of the Stakeholder Capitalism movement. Click here to view an Enterprise Engagement Alliance Youtube video interview with Freeman.
Thirty-seven years have passed since R. Edward Freeman published Strategic Management, a Stakeholder Approach, which addresses the fundamental theory for organizational management based on stakeholder principles.
“We’re further along than you might think: between the fourth and fifth innings,” he says. “I speak regularly with senior management, and I see that addressing the needs of all stakeholders is a top priority. They just aren’t sure what to do.” According to Freeman’s definition, “Stakeholder Theory is a view of Capitalism that stresses the interconnected relationships between a business and its customers, suppliers, employees, investors, communities and others who have a stake in the organization. The theory argues that a firm should create value for all stakeholders, not just shareholders.” 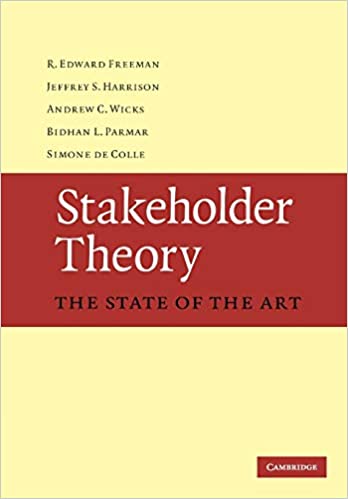 Freeman believes that “The 21st century is one of ‘managing for stakeholders.’ The task of executives is to create as much value as possible for stakeholders without resorting to tradeoffs. Great companies endure because they manage to harmonize stakeholder interests.”
So what’s the difference between Stakeholder Capitalism and Stakeholder Theory? “I look at Stakeholder Theory as the underlying idea that gave rise to the thinking behind the Stakeholder Capitalism movement. A lot of people have tried to take credit for the movement's creation, but it comes from many sources. My first paper on the subject was published in 1979. I was trying to figure out what business would look like if people took the stakeholder issue seriously, and then my first book was later published in 1984.”.

Freeman recalls that his early thinking was triggered by the work of Marion Doscher and Robert Stewart of the Stanford Research Institute (now known as SRI) and her colleagues in the 1960s, who had started using the term based on the Scottish notion of stakeholders in gambling. He also cites the theories of Eric Rhenman, a business professor at the Stockholm School of Economics in the 1960s whose work on stakeholders went into the development of the Swedish Model, an approach that also embraces government involvement in addressing the needs of all stakeholders in society. (A little later, in the early 1970s, the World Economic Forum began to use the term Stakeholder Capitalism.)
There are four ways to look at the Stakeholder Capitalism model, Freeman explains.
There is a mathematical connection, he asserts, between the value created for customers, employees, and other stakeholders that compounds as organizations enhance the connections. “The more one creates value for one stakeholder, the more it’s possible to create value for others.”

The Connection Between Purpose and Profit

“The obvious point is that: how much money you make depends upon the value you create for your stakeholders. It’s a better way to create wealth. It’s a better way to create a just society. It’s a mistake to only think about creating wealth. The idea of reducing business economics to profit, I’ll have none of that. This is a better way to create both wealth and a better society. Businesses don’t only have to deal with markets and economics, they must deal with societal issues. That’s what creates the guilt or the ‘checkbox’ behaviors. What are the society issues that the pharmaceutical companies must deal with? They have to address them or will be deemed irresponsible for failing to do so.”
So why does Freeman believe we’ve progressed into the middle innings of the game with so little to show for it. “One of the reasons is that if the melody is good, people start eventually humming the tune. After years of being ignored, the subject is gaining attention because we don’t need companies to have great Corporate Social Responsibility programs, we need them to start by telling the truth to their stakeholders.”
He believes the statement of the Business Roundtable on the purpose of the organization, the Conscious or Inclusive Capitalism movements, Impact investing, ESG, all are driving more interest in the subject, no matter what the name that finally catches on.
“Companies have always had to deal with tensions between shareholders, other stakeholders and profits and society.” It only makes sense, he asserts, to align their interests.
What are some of the key obstacles to addressing the human element in business? “We have the wrong idea of what a human being is. A human being wants to maximize self-interest but that also includes the interests of others. People are complicated. Human beings have dominated the earth by cooperating. We invented vocabulary. Incentives play a part, but what we have not yet understood is that people want to do something meaningful.  They want to work for more than the paycheck. That matters. You can’t but find it interesting the companies that stood by their employees during the pandemic aren’t having the same labor shortages as others.”
Yes, there is value for shareholders to be uncovered, Freeman believes. “One of the reasons I am so optimistic, as we uncover this value, companies will do better. People work better when they believe in what they are doing. Incentives only work in certain cases. If markets had people without a sense of justice, they wouldn’t work very well.”

The Obstacles to Change

Why have CEOs failed to identify this area of wealth creation? “People are complicated. Many are driven by ego, their own power. Or maybe even by how they will be remembered. I do think people are beginning to get the message, which is stupidly simple. All you have as an organization are some people who work for you. Values and purpose only live in how you treat people every day. They live in what type of system your organization has. Making that link to a sense of purpose, that all stakeholders are important, requires structure. It’s not easy to get everyone harmonized.”
Many organizations, and he sees this with his students as well, “are organizing themselves around teams. It’s tricky,” he says. Successful teams have strong values, he observes. It’s not the specific structure that counts. “Sometimes in the haste to reorganization, companies put in a new structure, but then realize they have come out with the same result.”
Freeman is skeptical about standardized metrics, because he believes that organizations must address metrics on an individual business. “I don’t think there’s a single business model for everybody.” If he were running a company, he says he’d have metrics for each set of stakeholders, which also can include the government, regulatory bodies—any institution that can affect decisions.
He rejects the tradeoffs implied by some between ethics and business. “Generally, if you must make the business case, you have to make the ethical case. The phrases are ‘business and ethics. Stakeholders and shareholders. Profits and purpose. It’s debilitating to juxtapose those terms and assume there’s a tradeoff.”
To advance these principles, Freeman says, “we have to start engaging young people in business.”


[return to top]
Master the “S” of Environmental, Social, Governance (ESG), A.k.a. Stakeholder Capitalism
The Enterprise Engagement Alliance at TheEEA.org is the world’s first and only organization that focuses on outreach, certification and training, and advisory services to help organizations achieve their goals by fostering the proactive involvement of all stakeholders. This includes customers, employees, distribution and supply chain partners, and communities, or anyone connected to an organization’s success.
Training and Thought Leadership

Engagement Digital Media and Marketplaces
Video Learning
The EEA Human Capital Management and ROI of Engagement YouTube channel features a growing library of 30- to 60-minute panel discussions with leading experts in all areas of engagement and total rewards.